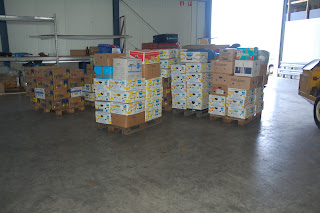 Dear Mr. Maarten,
I promised to you to send some pictures, in order for you to understand how we distributed the goods from your last truck. The couches were the “stars” of all the gifts, our beneficiaries being very happy to receive its and to use its. And I am not exaggerating at all: for instance, when I arrived in Abrud with first couches, beneficiaries were so enthusiastic to help for unloading that I could hardly make about 10 pictures and unloading was ready.
I distributed couches, biscuits and other things in 3 locations: to the center of Abrud, to the center of Galda and to a small children home in Cimpeni (near Abrud). I still have 2 couches left for an old people center in Girbova.
I attached pictures from unloading the truck (June 19), with 2 couches that we put in Galda’s big hall, with Abrud hall before and after we arrange the couches and with the children’s home in Cimpeni. In Cimpeni the old couch was so damaged that it broken when we tried to move it. Anyway the new one was perfect for the remaining space.
I also attached a picture with the kitchen from Abrud because we received it without one leg, the donor from Holland said that he sent the leg and, in order to solve the situation, our workers made one leg identical with the other ones. Please inform the person who donated this kitchen, that now the kitchen works well and looks well. (As a matter fact the kitchen works perfect!)
I attached two pictures with the dining table from Abrud because we received the chairs from you, and the fabric from these chairs is almost identical with the fabric on the couches. And I really like the way our center starts to look better and better with your help, and I think that you deserve to see, step by step, these improvements.
In last truck you sent us some office chairs: we stored its in the warehouse because in September we will move all our offices in a new building, and then we will need its.
I apologize for the fact that I am not loading these pictures on Picassa, but we are not allowed to make public any pictures with our activity. But everybody from your foundation is welcomed to come and see how we are using the gifts from you.
Thank you for everything!
I wish you all the best!
Gepost door Maarten Koel op 8:31 p.m. Geen opmerkingen: 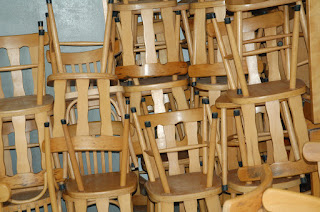