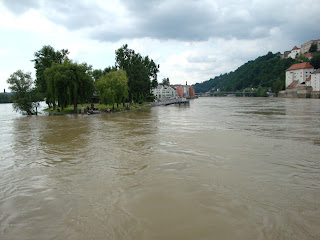 Heavy rains and melting snow have caused floods in parts of Romania, leaving 1,400 people stranded and flooding many homes. In Buzau county, some 1,400 people were cut off when a road connecting the villages Terca and Ploştina to Lopatari was washed away by the River Slănic, which burst its banks. Numerous homes are also reported to be flooded in Bistriţa.

“The only way to access Terca and Ploştina, the road connecting the two villages to Lopatari has been destroyed and the area cannot even be reached on foot. Protective dikes on the River Slănic were damaged and pedestrian bridges destroyed. It is an extremely serious situation, we are now assessing the damage and sending the Inspectorate for Emergency Situations in Buzau. If the rain stops, we could resolve the situation in two or three days, if not, God knows,” said Lopatari Mayor Vasile Popescu today (April 4 ), quoted by local news organization Mediafax. The flooding started last night and in the early hours of this morning. Emergency services are unable to reach the 1,400 people cut off by the floods.

Extremely heavy rain last night, reaching over 30 litres per sqm in some parts of Buzau, where it has been raining for 12 hours, caused the River Slănic to burst its banks, damaging to roads and bridges and resulting in widespread flooding.

The river Jiu was also placed under code red for flooding in Dolj county, while other rivers in the country are under orange alert for flooding: Trotuş, Putna, Râmnicu Sărat, Crişul Negru, Crişul Alb, among others.
Gepost door Maarten Koel op 8:19 a.m.